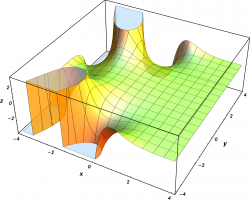 Our areas of expertise

C*-algebras is the study of algebraic systems of linear operators on Hilbert space, which grew out of quantum mechanics in the first half of the 20th century, and has been applied in many ways, including quantum field theory, knot theory, number theory, and tilings.

Complex and Fourier analysis examine the properties that distinguish functions which can be expressed as power series and/or trigonometric expansions. Research in these subjects has applications to signal and image analysis and many other areas of science and engineering.

Methods of analysis are applied to fundamental problems in theoretical and mathematical physics, including classical and quantum electrodynamics, relativistic quantum mechanics, quantum optics and nonlinear waves.