History of the School

The School of Mathematical & Statistical Sciences – a Brief History 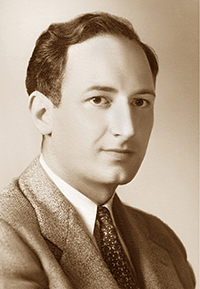 The School of Mathematical & Statistical Sciences is located in Wexler Hall, historically known as the A-Wing of the Physical Sciences Center. Wexler Hall was built in the late 1960s. It was dedicated in 1977 as Wexler Hall in honor of Dr. Charles Wexler, the founding chairman of the Department of Mathematics, in appreciation of his outstanding service to the university from 1930 until 1977.

After the war, the department rapidly expanded and its location moved from Old Main to the Business Administration Building. The General Electric Company installed their IBM 704 electronic “calculator” on campus in 1956. The first ever National Science Foundation grant for mathematics at ASU was awarded to Professor Lowenstein in the late 1950s. The first masters degree was awarded in 1958 and the Ph.D. program was approved 1960 - the year after Arizona State College was renamed as Arizona State University.

Starting in the 1970s and 80s, the Department of Mathematics underwent a significant expansion. Research groups in dynamical systems, mathematical biology, number theory, discrete mathematics, operator theory and statistics were formed starting in the early 1990s and these groups remain strong today. During 1991, at least ten tenure-track faculty were hired.

In the year 2000, the department was renamed the Department of Mathematics and Statistics to reflect its expanded focus. A group in mathematics education was started shortly thereafter. In 2008-09, the department was renamed the School of Mathematical and Statistical Sciences in recognition of its broad focus that encompasses theoretical and applied mathematics, statistics and mathematics education. Four separate Ph.D. tracks in these disciplines were started about the same time. In many universities, these disciplines are housed in separate departments and even separate colleges. Our school keeps these disciplines housed under the same umbrella in keeping with ASU’s philosophy of fostering multi-disciplinary work between related areas of study.